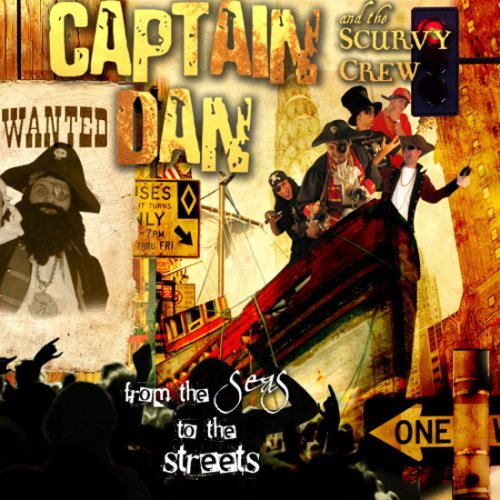 Louder than a broadside volley of Cannon Fire, Captain Dan amp; The Scurvy Crew have hit the nation like a hurricane. Never before has the Golden Age of Piracy and Hip-Hop been blended so seamlessly. Their debut album, Authentic Pirate Hip Hop was released in 2006, satisfying a growing need for pirate rap in the nerdcore and pirate communities. Their second release, Rimes of the Hip Hop Mariners, met and exceeded many fan expectations, proving that the group was more than a simple novelty act. Their albums are currently the #1 and #2 best selling nerdcore albums on the critically lauded indie musician site, cdbaby.com. Their next album, From the Seas to the Streets was release January 2009 and is the most epic collection of pirate hip hop ever produced! The group has been featured on radio shows such as Los Angeles KROQ Kevin amp; Bean show, Bubba the Love Sponge, and WZZR s Real Radio Nights amp; The Love Docs. The crew s music and videos have shown up on the front pages of Comedy websites such as Drew Curtis s Fark.com, Albinoblacksheep.com, somethingawful.com, and on the wired.com blogs. The group was also featured in Blender magazine in 2008! The Scurvy Crew boasts the most notorious group of rapping pirates on earth! Led by their swashbuckling leader Captain Dan, the crew includes Quartermaster Sea Dawg, Gunner Scott Free, Navigator MC Treasure, Beat Master Azis, Boatswain Zealous1, and Captain Dan s own arch nemesis Fred Admirality Crawley!

Where to begin when describing the wonderful oddity that is Captain Dan and the Scurvy Crew? By all common sense, such an apparent novelty act should long ago have gone the way of the dodo. But the crew hit the ground with surprising momentum - their first pirate gangsta rap album, Authentic Pirate Hip Hop was a shameless joy to the ears. It seemed an impossible act to follow, and yet, a mere year later, follow it they did with Rimes of the Hip Hop Mariner. But rather than treating us to more of the same The Scurvy Crew expanded and developed their hip-hop pirate concept to make for an even better end product. And now, just one year since Rimes, the Scurvy Crew has struck again with their third album, From the Seas to the Streets. Love them (pirate-core enthusiasts, hipsters, gangstas) or hate them (period reenactors, grandparents, fuddy-duddies), I think we can all agree that Captain Dan and company aren t ones to rest upon their laurels. For three albums running they ve reached for new heights, and once again have achieved incredibly surprising and satisfying results. The album begins with the title track From the Seas to the Streets, which starts with a bit of a swashbuckling orchestra that s soon joined by the rap stylings of usual subjects Captain Dan, Sea Dawg, and Scott Free. A mix of urban and epic adventure, it wakes you right up and lets you know just what you re in for. Ship2Ship follows, being a song of battles and seaside warfare. Again we hear the voices of our usuals, but also chiming in is 'Admirality Crawley - the limey who faced off with Captain Dan on Rimes to such great effect as they debated superiority between Pirates and the British Navy. Crawleys inclusion in this second album comes as a fine surprise that adds a brilliant contrast. Burning Sea and Diggin For Gold are two more excellent tracks in the same spirit as Dan s earlier albums, but Drunken Sailor brings a new twist in being a pirate-rap version of the traditional sailor s drinking song - it features a fantastic blend of the original tune and lyrics, mixed in with new beats and dialogue. It s a joy to listen to, and I daresay even a hardcore traditionalist would have to tilt his hat in respect. Ladies in Scarlet then thows yet another curve ball as it features newcomes Anne Bonney and Mary Read as the primary vocals. A classic tough chick rap about how the ladies can kick ass as well as (or better than) the blokes - and these ladies deliver the lyrics with grace and conviction. On the Account and Pirates Code then return to pirate roots, as both were clearly inspired by the actual practices of the pirate and maritime businesses - surprisingly educational for pirate hip-hop (although if you d rather just dance to the beat, that s also acceptable.) While many of Captain Dan s songs warrant an R rating, it seems that each album features one song of truly pornographic ambition. On this album it is clearly Chests O Plenty, which makes brilliant use of a harpsichord combined with the foulest lyrics imaginable. It s so shocking as to nearly qualify as high art, and I m ashamed to admit is amongst my favorites on this album (although I have many.) Calypos s Crabs also pushes the envelope, being a song inspired by the 50 foot voodoo woman from Pirates of the Caribbean (and the fact that she seemed to have a dreadful case of the crabs.) It s fast paced, energetic, and again features lyrics that will make you spew rum out your nose (assuming you re drinking rum, of course.) With From the Seas to the Streets, Captain Dan and the Scurvy Crew have again struck gold - three albums and forty songs without a dud in the bunch. They ve managed to reinvent themselves along the way so as to stay interesting, while also being true enough to their roots to remain the performers we ve come to love - and that s really an amazing achievement. --bilgemunky.com

From The Seas to the Streets is the third CD from the Arr-core rap band, Captain Dan and the Scurvy Crew. Unless you're deep into the geek music, you're probably unfamiliar with the pirate-rap genre, let alone Captain Dan and the Scurvy Crew, but you need to be if you want to score some geek points. What is Arr-core you ask? It's hip-hop about the seas, wenches, gold, rum and everything else a pirate loves. And these guys take their pirating seriously. These aren't the family-friendly pirates brought to you by Disney. Captain Dan and his crew have the mouths of salty sailors. I enjoyed the songs, and I'm glad to add it to my growing geek music collection. I particularly liked Ship 2 Ship with its pounding beats and catchy chorus about battles on the sea. From the Seas to the Streets and That's How We Row are also standout tunes. A couple of the songs borrow melodies from old sea tunes like Drunken Sailor, which tells you what you should do with a drunken sailor, and Blow the Man Down, which mimics the sea shanty. I liked Drunken Sailor, but I thought Blow the Man Down was one of the weaker tracks on the disk. The other tracks cover various pirate themes like Chests O' Plenty which covers Captain Dan's adoration for large-breasted wenches, and Diggin' for Gold, which is about, well, digging for gold. Calypso's Crabs gives a warning to all the sailors about visiting a woman named Calypso when they take some shore leave. Don't think the Scurvy crew is all about putting down the wenches. Ladies in Scarlet features a couple female pirate rappers with the message that girls can be good pirates too. Overall, From the Seas to the Streets is another strong release from Captain Dan and the Scurvy Crew. Certainly, it takes a certain kind of listener to appreciate Arr-core rap, but I think there might be a few of those among the teeming masses of BBspotters. You can get the CD or MP3s over at CD Baby where you can also listen to samples of all the songs. As ironic as it may seem, you really shouldn't pirate this one. Arr. --BBspot.com

We have baby names for 88 origins and 7 religions and it keeps increasing. Using our exclusive baby name tools, you can find the most unique and beautiful baby names. Also, you can generate the baby names by mixing the parent names. Start exploring..

Name of the Day!