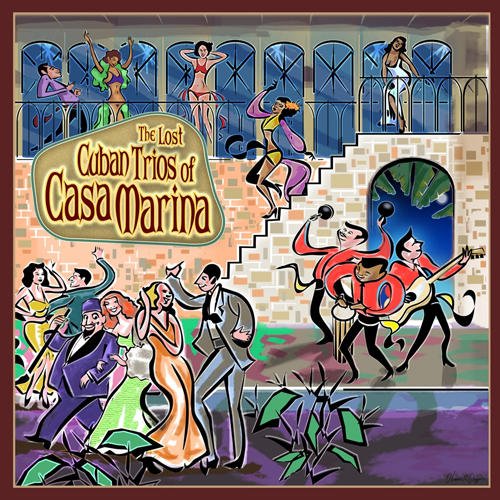 The story of these romantic recordings of traditional trio music plays like a cinematic saga. It starts with two Jewish boys who fled from the Nazis, settled in Cuba and fell in love with the island and its pleasures, especially its beautiful women and seductive sounds. It ends 50 years later with the release of this CD of vintage recordings that survived the Cuban Revolution, a second exile journey, and finally decades of neglect in storage in rainy Seattle.

All the songs on Cuban Trios of Casa Marina are familiar and beloved Latin standards from a genteel, bygone era in popular Latin music. Like the Buena Vista Social Club, this record evokes nostalgia for classic sounds from the 30s, 40s and 50s. But instead of remakes of old standards, these are the original recordings made in pre-Castro Havana, now available to the public for the first time. A different revolution, the digital one, allowed for the transfer of the original analog tapes from 1958.

The two immigrant brothers who made it possible are Harry and Morris Schrage. They were just 10 and 13 when their family had to flee the Nazi invasion of their native Poland in 1939. A cross-Atlantic voyage brought them to Havana, then the sin city of the Caribbean and a haven for gambling, fabulous floor shows and first-class bordellos. The Schrages settled in neighboring Matanzas, where their enterprising father rebuilt his fortune making sneakers. As young adults, Harry and Morris worked in the family business, earning enough to live the life of privileged playboys. The fun-loving siblings soon became regulars at Havana's most exclusive and cosmopolitan brothel, the fabled Casa Marina, which drew a wealthy international clientele.

Casa Marina was known for the exceptional beauty of its bevy of women, under the care of grandmotherly Madam Marina. But Harry and Morris didn't just appreciate the ladies. They were also impressed with the quality of the strolling musicians who added just the right mood for romance. The Trio Zamora and Trio Melodicos played love songs on demand for a dollar a song, with a rich repertoire of popular boleros (Besame Mucho), cha cha chas (El Bodeguero), cumbias (Mi Cafetal) and even Mexican huapangos (El Crucifjo de Piedra).

Harry was a budding audiophile and it was his idea to record the groups. He set up a makeshift recording studio in his bedroom, using an Ampex reel-to-reel tape recorder that he bought in Miami and was state-of-the-art at the time. All the songs on this CD were recorded during those home-studio sessions in 1958. Musically, they are true to classic trio style: lyrical acoustic guitars, vocals in three-part harmonies, and light percussion. In those days, trios were as ubiquitous in Latin America as garage bands in the U.S. But artists added distinctive flavors in different countries. Many of the songs here were recorded by the top trios of the day - Mexico's Trio Los Panchos, Puerto Rico's Trio San Juan and Cuba's Trio Matamoros.

Harry had no immediate plans to release the tapes in Cuba, and soon it would be too late. The family fled the Revolution in 1960, but Harry made sure to bring the trio tapes with him. Morris settled in Southern California, where he became a successful car dealer. Harry became a top executive with Boeing in Seattle, where he lived until he died of a heart attack in 1973 at age 46. Still among his possessions at the time were the old recordings - a set of seven, 7-inch Scotch magnetic tapes in their original boxes. More than 25 years later, Morris inherited the tapes from his brother's widow, Maya, who suggested they be released as a tribute to her late husband. The wish came true when Morris teamed with his old friend, Jimmy Maslon of Ahi-Nama Music, to issue this CD.

Don't forget to upgrade your browser

This browser is not supported.
Download the latest browser below to get the best possible experience.

Wherever Kids Learn This Year, We're Here for You

Raise Funds for Class with ClassroomsCount™

START A CAMPAIGN
for educators

Get Set for Back to School

Josephine Against the Sea

Get kids excited for the year with skill-building resources and fun, relatable reads about the joys of Kindergarten

Just in Time for the New School Year

Expand your book collections with titles selected by teachers.

Inspire literacy and learning for all students with our comprehensive solutions